It all started with a woman, a red pinto station wagon
and a little fluff ball from Montana.
About Us
What started as a dream turned into a family affair.

Sassy Sams was founded in 1986 by Vicki Nolte after several years of research and a little luck. The interest in Samoyeds was sparked in 1972 when a  neighbor moved in next door with a samoyed named Suzie. Deciding that someday she wanted to have one, Vicki started carefully planning and researching breed lines.

It was finally decided to go to Polar Mist owned by Lynette Hansen (now Blue) and located (at the time) in Libby, MT. Vicki put a deposit down for a little girl out of CH Ice Way's Ice Breaker and CH Polar Mist Naughty Angel. The breeding produced six puppies and of those only two were girls. One was already promised to another person, and the other, Lynette planned on keeping for herself. Disappointed, Vicki decided to be patient and wait for the next Naughty Angel litter. She did not have to wait long, because as it turned out, Lynette decided she was not going to keep hers and called to see if Vicki was still interested. This little puppy went on to be CH Polar Mist Sassy Angel CD (Angel), the foundation bitch for Sassy Sams.

Angel was bred to CH Frostyacre DBL Eko O'Westwind, producing a litter of all boys. Vicki kept one and named him Sassy Sam's Hotshot Lover Bear (Bear). Bringing a little color to the kennel, Bear was just like his sire, predominately biscuit. Vicki's oldest daughter, Carrie, and Bear formed a team and Bear was Carrie's primary competition dog. Carrie competed in 4-H and AKC events with both Bear and Angel. Carrie was able to put obedience titles on both dogs and excelled through the 4-H classes.

The second litter Angel produced was a pairing with CH Shekinah's Beraka of Aimee. It produced all girls. Once again, Vicki kept a puppy and named her Sassy Sam's Beraka Baby (Rockette). Vicki's other daughter, Cindy quickly became attached and Rockette was to be Cindy's primary dog. Cindy competed and was very successful in 4-H and AKC events, just like her mother and sister. She was also able to attain an obedience title on Rockette.

From these three dogs Sassy Sams was founded. Vicki has continued breeding, trying to improve with each generation and striving to produce puppies that perform well in all arenas. Starting with conformation, Sassy Sams has gone on to compete in obedience, junior showmanship, agility, herding, pack hiking and weight pulling.

The kennel is evolving and continuing in the family tradition. Carrie's oldest daughter, Autumn, has picked up the leash and has started her own journey showing dogs with Sassy Sam's Affair W Wintermist (Kobe). It will be interesting to see what the future holds for Sassy Sams and the dogs that are yet to come.
sassysamssamoyeds © 2021 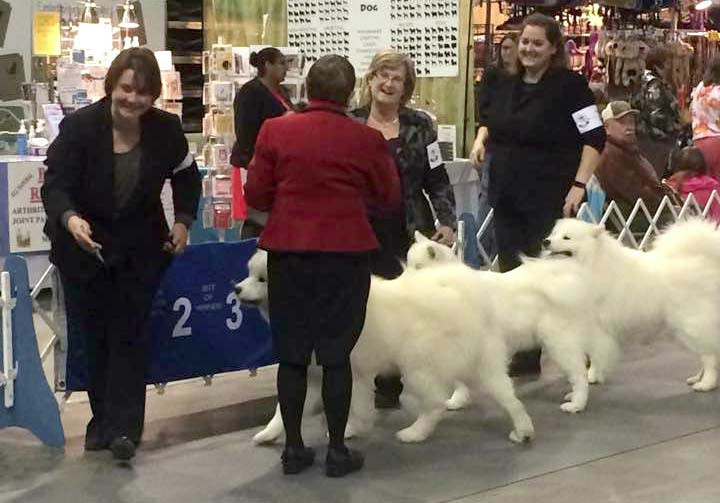 A winning family line-up: Carrie wins Best of Winners, Vicki with Best of Opposite Sex, and Cindy following with Select Dog.